The Hunt for the Devil’s Toenail was a bespoke, interactive, indoor and outdoor treasure hunt, spanning four days and four locations in and around Scunthorpe, North Lincs.

The aim of the hunt was to complete at least one of three mini treasure hunts at the first three locations around Scunthorpe, in order to find a final fourth location where players had the chance to win a one-of-a-kind, solid silver brooch based on the Devil’s Toenail fossil. Players also got the chance to meet some of Frolicked’s colourful characters along the way:

The Devil’s Toenail fossil (which looks a little bit like the talon of a strange beast!) can be found on the beaches along the coast near Scunthorpe, which is why the coat of arms of the town also features two Devil’s toenails:

Our director, Beka, produced three original illustrations of the first three locations, which were won by players in 3rd, 2nd and 1st place: 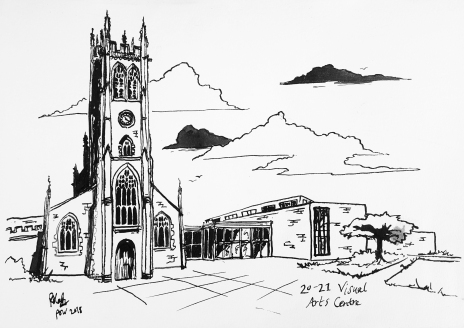 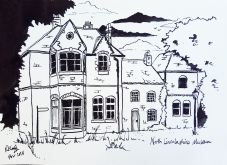 We also created a series of bespoke maps for each location to give players a fighting chance to find all the clues:

Spread across the clues was a coded sentence that players had to unscramble and solve (with the help of their wits and the illustrations accompanying each clue). Here is an example of one of the codes featured in the Hunt, based on the Mayan language:

To find the final location, participants had to complete a mini hunt to collect the pieces of a treasure map. Players had to finish at least one hunt in person, but could then download the rest of the map from our Facebook page:

View all posts by Beka H

Puppets in progress! A backwards journey showing you how the #puppets for @northern_broadsides new production of "Quality Street" were constructed and crafted. Lots of techniques and lots of different materials to get these puppet children to the finish line! Beka has always said a puppet maker is definitely a jack of all trades (master of none 😉)... . . . . . #latex #casting #sculture #clay #mold #molding #airdry #plasterofparis #faces #body #wadding #foam #bamboo #wire #stuffing #acrylic #paint #fabric #sleeves #pingpongballs #puppetry #making #crafting #design #theatre #indoor
We are pleased to announce that Beka, our Director, has made the #puppets for the up and coming, brand new performance from @northern_broadsides called "Quality Street". Some lovely pics from @srtaylorphotography too. Process photos to follow! . . . . . First shows are @viaducttheatre #puppetry #glove #rod #halfbody #qualitystreet #halifax #performance #theatre #indoor
Merry Christmas everyone!! Thanks to @fmtmcharleville for the perfect #puppet themed container for some sparkly lights and hope you all have a fantastic holiday season! A little experimental loo roll illustration, made by our director, Beka, gives a tiny glimpse of a new show in the making... See you in 2020, folks!! . . . . . #Christmas #merry #streettheatre #puppets #puppetry #tree #looroll #toiletroll #recycle #illustration #blackandwhite #pen #fineline #posca #wood #woods #show #theatre #outdoors #outdoorartsuk #outdoorarts
The goddess herself with her companions... Berserker managed to keep his tree under control and also succeeded in not to losing his temper (or his marbles) whilst interpreting for the lovely Nótt at #Nightfall19 yesterday. Lots of fortunes told and lots of colour therapy from Nótt's ever-changing lantern! Thanks so much to @stellar.projects for a beautiful event in a gorgeous setting @pparkmuseum . . . . . #puppetry #puppets #streettheatre #outdoorperformance #outdoorartsuk #outdoorarts #goddess #deity #moon #night #nightsky #raven #crow #nott #berserker #norse #myth